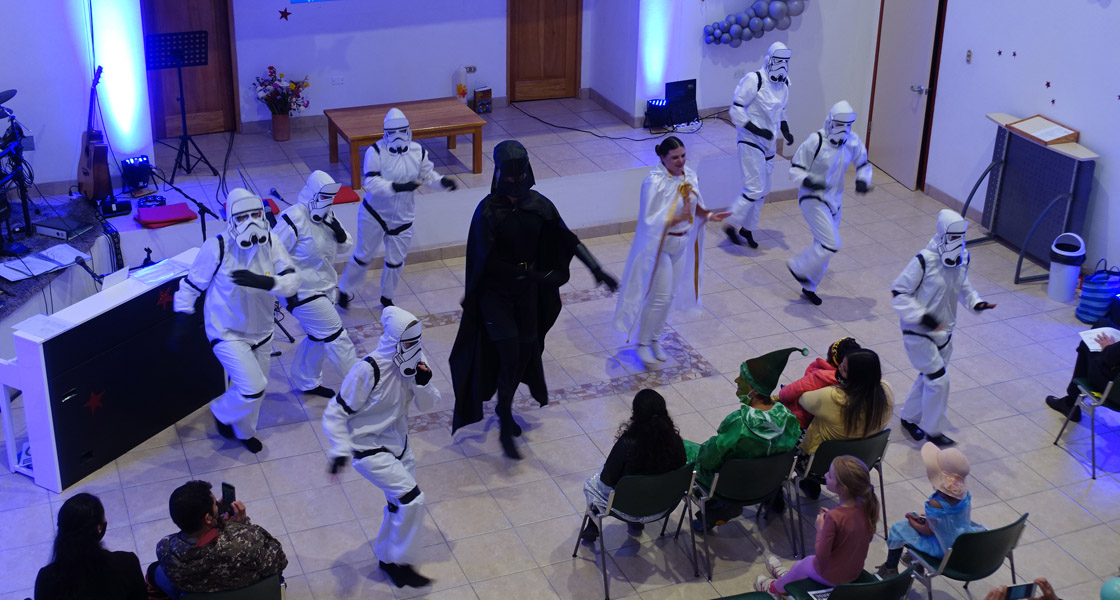 Progress and Highlights I

During New Year’s Eve celebrations, an astronaut crew from a distant galaxy made a surprise visit. Now their spaceship is on its way back to alien worlds again. As they travel through the universe, the space travelers can spread the good news of the “Hospital of Faith”. Diospi Suyana is a modern hospital where poor patients are treated at a high level with respect and love.

January 2022 continued as December 2021 had ended. Many patients from near and far sought medical treatment.

It’s a story reminiscent of Bill Gates. Sra. Advincula in the middle Advíncula (center) grew up in poor conditions in the Peruvian mountains. Even as a teenager, she thought a lot about the meaning of life. One day, the 14-year-old sat down in the back row of a church. What happened next, she will never forget. She made the decision that morning to trust God forever. She would follow Jesus Christ and make her decisions according to His will. Sounds pious. What has become of it?

The simple country girl from the mountains of Junin State became a successful businesswoman. Today, her family owns several restaurant chains in the capital Lima with over 400 employees and a steep growth curve.

After watching a television program about Diospi Suyana, she visited Diospi Suyana Hospital with her son Victor (left) on January 3, 2022. The two didn’t talk much during their tour of the hospital. But before she left, the self-made millionaire noted, “Diospi Suyana has totally strengthened my faith in God!”

It was not long before the family began to actively support the mission hospital and Colegio Diospi Suyana.

In 2017, we negotiated with a family to purchase an FM frequency for the metropolis of Cusco. The price “X” was in line with the market value, but the amount was beyond our means. Walter Cervantes (pictured left) was one of our first Covid patients in 2020. Because of the good treatment at the mission hospital, he survived his illness. Out of gratitude, he sold Diospi Suyana not one, but three (!) frequencies in January 2022 for the same price as at that time. The gentleman in the blue suit was also present in the notary’s office. He is Dr. Omar Alvarez, the current Vice Minister of Communications in the Peruvian government.

For many years we have been looking for properties in Curahuasi to organize large youth festivals. After a long and thorough search, we found what we were looking for at the beginning of the year. The site is a 10-minute walk from our amphitheater. It is flat and offers optimal conditions for camping. Urologist Dr. Benjamin Zeier (left) and head of administration Louis Fischer make a highly satisfied impression in the photo.

In October 2020, something is now happening that proves beyond doubt that mothers can also have good ideas. Helga Müller presents her daughter with a copy of the book: “Walking on Water – Diospi Suyana, Faith in the Endurance Test!” This 300-page book is about practicing Christianity. Professionals of every stripe work at a high level for the poorest of the poor. Their motive: faith in a loving God.

Something clicked for Sonja Müller. She now manages our dental laboratory as a master craftswoman. If you would like to learn more about her exciting life journey, you can watch the following television program: https://www.youtube.com/watch?v=8XnDXjLgLog&t=6s

Since the foundation of Diospi Suyana e.V., Olaf Böttger has led the association’s business as chairman. Over the past 20 years, the southern Hessian has had many good ideas. One of them is the purchase of a duster for the recital trips. The car can be refueled cheaply with LPG. Acquisition and maintenance are comparatively cheap. On the speaking tours, we tell a story of faith that expresses our gratitude to God. This also explains the license plate. It means gratefulness.

When the paraplegic came to the hospital in February, accompanied by his wife, he was suffering from back pain and a thyroid disorder. Dr. Martina John was able to help him with both problems. “Doctora,” he said softly
and pointed with his hand to his wheelchair. “Is there anything else that can be done?” Wheels, upholstery, brakes were defective. A real pile of junk… Don Cristobal and colleagues from our repair shop managed to turn three old
wheelchairs to conjure up a new model. The patient Don Walter went home overjoyed.

Christian Haupt, Henriette Söll and Rafael Burkhardt went around the blocks with music and a lot of hoopla and already they had 20 children in tow. The whole thing reminded a little of the Pied Piper of Hamelin. So, at the end of March, a new scout group was formed, where enthusiasm and crazy ideas are the name of the game. They now meet every Thursday and usually the lessons are frequented by 30 to 40 children.

The ninth year of our colegio officially began in March. With 450 students and full classes, 2022 also showed growth in staffing. As a reminder, our school started in March 2014 with 180 students. Finally, after 24 months, there was a face-to-face class again for the first time. We wish the team of directors around Matthias Rehder a lot of creativity and staying power.

For two years, a board shack had separated most of the 1st floor for Corona patients. On April 18, it was removed to the delight of all. By the end of 2022, 124 patients with severe covid courses received their various ventilatory therapies in our isolation or intensive care units. 94 people survived. This corresponds to a percentage that is comparable with European results.

Christine Fleck has been baking the healthy Diospi granola since 2008. She and her husband morphed into Diospi Suyana’s most ardent supporters. On the bag in the picture are all the contact details. In the blur of the background is the mission hospital on its plateau in the valley.

In April, the TV station VOX presented the fate of our missionary family Zeier. A television team had already accompanied the Zeier family before they left Germany and visited them in Peru afterwards. Urologist Dr. Benjamin Zeier and his wife Lena, a physical therapist, decided to take this bold step in 2018. Their motive: they want to serve God with their lives. – You can watch the article here: https://www.facebook.com/watch/?v=276449276538297