Health Minister Dra. Zulema Tomas‘ alarm went at 2a.m.  Accompanied by four high-ranking officials she flew from Lima to Cusco.  At 7 o’clock the delegation was welcomed at Cusco Airport by Claudia Hugo and Benjamin Azuero from Diospi Suyana.  At 9:45a.m.the minibus that transported the ministerial party rolled through the hospital gates.

Before enjoying a small reception on the first floor Dr John homed in on a text from Isaiah 61 in his short address. “The Spirit of the Sovereign Lord is on me, because the Lord has anointed me to proclaim good news to the poor. He has sent me to bind up the broken-hearted, to proclaim freedom for the captives and release from darkness for the prisoners, to proclaim the year of the Lord’s favour.”  Dra Zulema listened attentively as the missionary doctor continued: “Honoured Minister, volunteers from all over the world work at this hospital because they want to realise what Isaiah prophesied.  We want to help, alleviate and heal!”

For two and a half hours missionary doctors John showed the Minister all the hospital’s departments.  In the packed waiting rooms patients hailing from several States spoke with the Minister.  Their communal tenor was: “Mrs Minister, every hospital in Peru should take Diospi Suyana as an example: here one is treated with love and respect!”

In the dental laboratory Elisabeth Franke described the great advantages of an automatic Cadcam-machine.  Dr John added: “Mrs Minister, the equipment you see here has a value of several 10,000s of USD, but the best thing we have is not the expensive devices, but our German missionary who has invested four years of her life for the Peruvian people.”

In the interview in Diospi Suyana’s TV-studio the Minister expressed her delight and promised to support the missionary hospital in whatever way was needed.

Strengthened by a tasty lunch our visitors headed home.  We thank the Health Minister for her extended visit and wish her God’s rich blessing for her important work.  When she disembarks the aeroplane in Lima she will have invested 17 hours for our work. Sra. Ministra: „Mil Gracias por su visita!“ 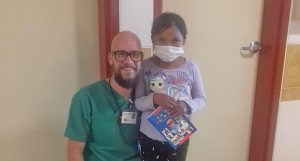