I meet Cornelius Kanke in a German-speaking community in Steinbach, Manitoba. He is the same age as me. While we eat a piece of cake, he tells me about his life.

“I come from Grischkowice, a village in the Altai Mountains. There I grew up. In 1980 I got married and moved to Kazakhstan. My wife and I both have German ancestors!”

“How was your life?” I want to know. His answer fits its dynamic appearance: “I enjoyed my life. As an athlete, I was really active. Cinema, entertainment and alcohol. I knew how to live it well!”

“Did a belief in God play a role?” Cornelius Kanke shakes his head: “Not at all, belief didn’t interest me!”

“You now belong to a church community. What happened?” I’m curious what the earlier mundane man will tell. –  “It was like this. In 1990, I visited my home village in Siberia. A relative told me that in the place just would have an evangelism event. I had no idea what that was and said, “Well, let’s go once and look at the pious!”

It is noticeable that Cornelius Kanke comes now to the climax of his story, because in his words I hear a lot of sense. – “About 100 people were sitting in a small tent. Some Russians sang songs about faith and a pastor preached. Suddenly it was totally clear to me that God is real and that Jesus died on the cross for my sins. I felt how much I needed his love. But in me raged a battle. What would my wife say and would my work colleagues laugh at me?”

“The pastor asked all audience to come forward if they wanted to put their lives consciously in God’s hands. I tore myself away from the chair and walked to the front.

As I left the tent by 11 o’ clock, the stars shone. It was to me, that God would stretch out his hand to me directly from the sky full of love. I had never before felt such a joy. I will never forget October 12, 1990!”

“Cornelius, what did your wife say?”- “She thought I was crazy. But eight years later she too was convinced as a Christian!” / KDJ 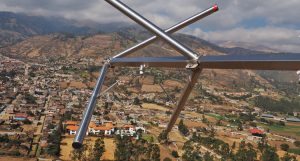 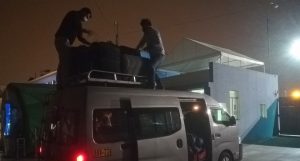