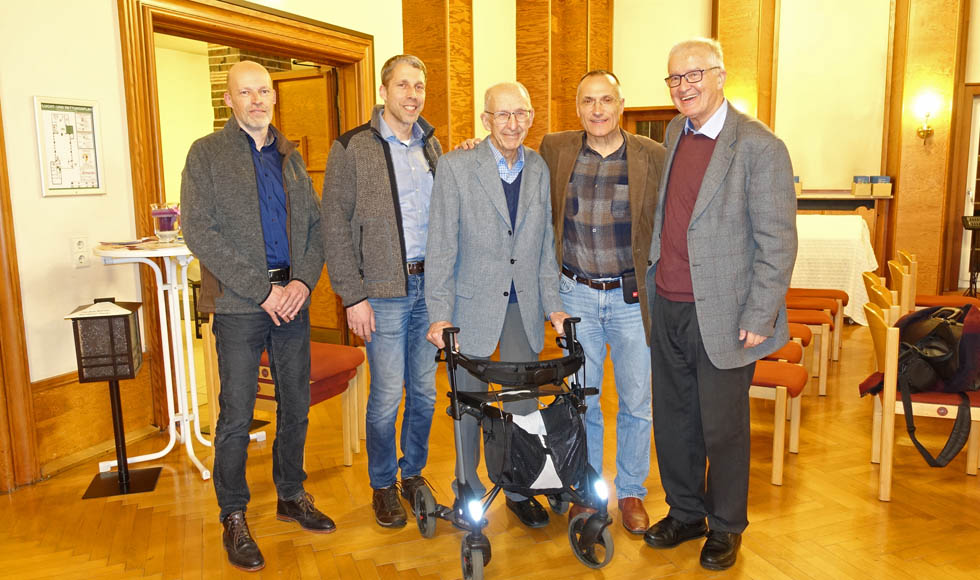 Do men of conviction still exist?

Having held 14 talks the current Europe-tour had to be terminated upon the Chancellor’s recommendation.  At the various venues more than 2,000 people listened to the German-Peruvian.  Hopefully we will be able to make up for the last four events in a couple of months.  A thankful resumé: many helpers and enthusiasts gave their utmost to ensure that the presentations were a success.  In every city there were special encounters.

The man with the Zimmer frame is not the youngest.  Fritz Schleeh lives in Baiersbronn and was head of a successful car showroom.  One day he went to his city’s largest bookshop and ordered a copy of the book “I have seen God!”  Having finished reading it he was so gripped that he bought 35 more books and distributed these to friends and relatives.

While paying for them he gave one book to the shop assistant saying: “Please give this book to your boss and ask him to read it!”

A while later Mr Schleeh received a phone-call from the donee: “Thank you for giving me this book.  During my rehab I read it cover to cover – I could hardly put it down!”

The shop owner sadly died from his medical condition, but before he passed away he gave his life completely to God – the book played a major part in his decision.

Mr Schleeh gave Pastor Müller the book too with a special recommendation.  That was the reason for the talk in Freudenstadt which resulted in two lovely newspaper articles.