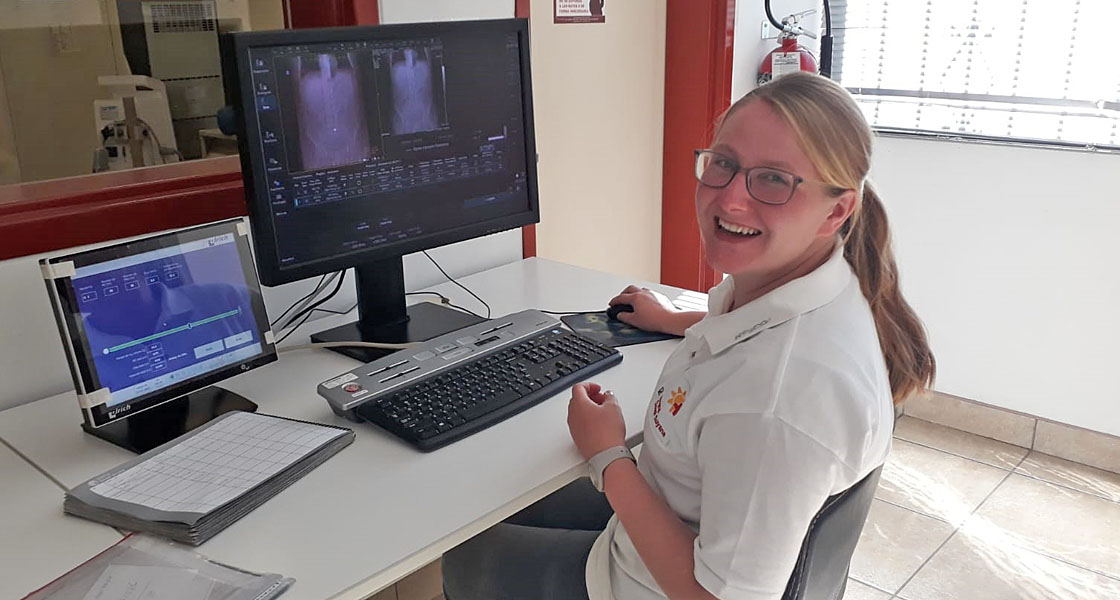 Was it her courage, her faith or Anita?

DS: Melanie,18 months ago you moved to Peru and have worked in the Hospital Diospi Suyana’s radiology department.  Where were you born?

MF: I was born in Bad Oeynhausen as the 5th of my parents’ nine children three years after my parents had moved from Kazakhstan to Germany.

DS: You are a passionate worker.  Was this the job you dreamt about as a child?

MF: Initially I wanted to pursue a nursing career.  When I was 14 years old I was able to do a placement in a hospital and noticed right away that lifting heavy things was not my forte.  A year later whilst canoeing a certain Anita Dürksen suggested that I should become a radiological assistant.  I followed her advice and having completed my training in 2013 I started working for the Heart and Diabetes Centre in Bad Oeynhausen.

MF: I loved every minute of it and could have spent the rest of my life there.

DS: But now you are sitting here in the Peruvian Andes.  How did this come about?

MF: A one point during my training course I prayed, “God, I would like to invest three years of my life for you!”

DS: But that is not a normal prayer.  Normally people ask God: “God, I need more money so I can enjoy a second holiday every year!”  Praying like that would seem absolutely absurd to most people.

MF: Jesus means everything to me and this prayer resulted from my deep gratitude that he has given me my life.  And I wanted to use it for his praise and glory.  At that point, however, I had no idea how seriously God would take my prayer and what it would mean for me one day.

DS: Why did it take such a long time until you applied to Diospi Suyana?

MF: I mused a lot about an overseas mission stint, but to be honest, I did not think I was up to such an adventure.  In 2014 I toured through Ethiopia with a group and we visited some social projects that were run by missionaries.  During this trip through one of Africa’s poorest countries I asked myself, “Is this where I am meant to be?”

A year later, in July 2015, I was part of a group of young people.  Together we helped build a children’s camp in Bolivia’s rainforest.  The book “I have seen God” was in my hand luggage.

MF: It was incredibly inspiring.  In a way it prepared me for a conversation I was going to have a month later, in August 2015.

Melanie Friesen in her element.

DS: A conversation with a pastor?

MF: No, Anita Dürksen told me about a weird telephone call she had received.  Dr John had called her ten days previously from Peru and had asked her, whether she wanted to become a part of Diospi Suyana’s radiology team.

MF: Her brother Harry Dürksen had spent two working in the missionary hospital’s nursing department and had told its head about his sister.

DS: It appears that this Dr John seems to have few inhibitions to make such phone calls.  But why did you and not Anita end up in Peru?

MF: Well, it was like this.  On the one hand Anita was totally overwhelmed by this phone call completely out of the blue, on the other she was totally unsure whether this was her cup of tea.  That is why she prayed: “God, if I should not go to Peru, then please send someone else!”

DS: Your exceptional girlfriend is absolutely hilarious.  What decision did you then take?

MF: It was a bizarre situation.  I had just read the book about Diospi Suyana and it had encouraged me to head to Peru.  But similarly to Anita, I remained undecided.

DS: Would you agree that the English saying “I used to be indecisive, but now I am not so sure” applies to you?

MF: No, not really.  I needed more time, since such a decision has far-reaching consequences.  Then in April 2016 Anita called me…

DS:… this same Anita who constantly seems to float through your life?

MF: Yes, her.  She wanted to know, if I had reached a decision, told me that Dr John was giving a talk in Espelkamp and thought that I should go.

DS: And this Dr John pressganged you into going to Peru immediately, like a sea captain combing through port pubs on the lookout for sailors.

MF: No, not at all.  He said that I should continue to pray and think about this possibility.

DS: But then you did decide to head South America-wards.  Was it a voluntary decision or did someone give you a push from behind?

MF: It was midnight on 17th August 2017.  I was working on the night shift and was manically busy, I mean it was before 1a.m. before I was in my duty room.  I prayed: “God, if you want me to go to Peru, I will go!”  But I immediately gave him an avalanche of reasons why I thought I should not go.

DS: And what were they?

MF: That I had no CT-experience, knew no Spanish and there were some situations in my family that were challenging me.

DS: One cannot say that you dive headfirst into every adventure.  You did think carefully about every step you took, did not you?

MF: After that prayer on a bed in a meagre clinic room every happened pretty quickly.  In October 2017 I attended Diospi Suyana’s 10th anniversary celebration, in March 2018 I sent my application to Diospi Suyana and left Germany on 3rd January 2019 for Peru.

DS: Looking back, would you say that it was worth it?

MF: Definitely.  I have learnt a lot, for example that God prepares one very well and that I can let myself fall into his arms 100%.  He is faithful and keeps his promises.

DS: Your personality type is not a go-getter.  What gave you the courage to do something that millions of others would only consider after three pints?

MF: Birgit Dörnen wrote a song “Mit weitem Horizont” (‘With a wide horizon’).  Despite being full of questions and doubts, God broke down my boundaries.

DS: If that is the case then we should give the visitors to our website the possibility to hear the song for themselves.  Melanie, thank you for this fantastic story and we are happy that you are part of the team. 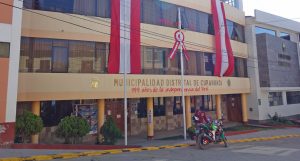 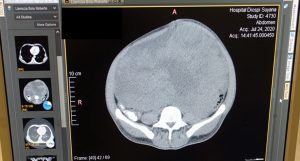 News
4 golden hands in the operating theatre and buckets full of blessing
30. July 20200 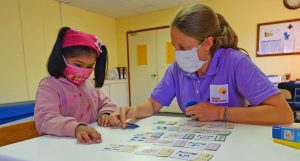 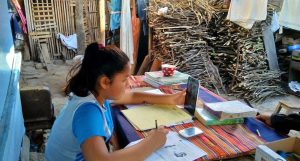 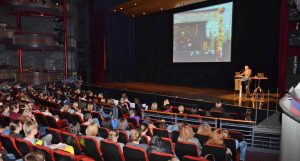 News
Everything is fixed for the September 2020 presentation tour
25. July 20200 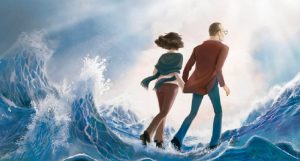