There are many contrasts in life – black and white, small and large, think and thin, good and bad. Peru is also a land of contrasts : from wealthy, sophisticated suburbs beside humble mud-bricks huts, to tourists walking the same streets as subsistence farmers, VIPs beside the forgotten.

I have seen firsthand these same contrasts for more than a year now. I live and work as a missionary x-ray tech in Curahuasi – a small village about 2 hours from Cusco (the location of one of the 7 Wonders of the World – Machu Picchu. Even so, here it seems nothing out of the ordinary. Here life revolves around cows, field work and a literal daily fight just to put food on the table. Here, there is no news of space exploration, building of sky-scrapers or the US Presidential Election. Here the people call themselves “the forgotten people” saying “We are not important, nobody would care if we cease to exist. Our ancestors were equally as oppressed, their culture and riches robbed and they themselves forced into slavery. Still today, it seems we are born only to spend our days fighting for survival”. This is the Peruvian state of Apurimac, approximately 2600masl in the Andean highlands – the so-called “Poorhouse of Peru”.

Nevertheless, now in the midst of all this misery, poverty and indifference, there is a sign of hope – a something that signals trust, love and an unfailing belief, Here in Curahuasi there is the Hospital Diospi Suyana – named in Quechua using a phrase that means “We trust in God”. The John family, along with countless others, have also put their trust in God to show the Quechua people that they are not forgotten. Last August the hospital was inaugurated and in October the first patient was treated. He didn’t even have the $1.5 to pay the Outpatient Clinic fee. Since that moment we have treated more than 3000 patients who have received a level of care equal to that available in middle-class Europe – physiotherapy, endoscopy, CAT scans and IVs. Even though these humble people are sometimes afraid of the big machines, they trust that we are willing and able to help them. For many of them our new hospital is their last hope. The other medical facilities in this part of Peru are simply insufficient and unaffordable for a simple farmer. In Hospital Diospi Suyana, patients are treated whether they have money or not. They are treated with respect and dignity, sometimes for the first time. Since that first day in October, we as staff in the hospital have been eye-witnesses to many happy faces, full of hope after receiving the help they needed. Even so, we have also seen tears of sadness when a patient’s illness is too far progressed or we simply don’t have the equipment needed to treat them.

Inspite of this one fact remains unchanged : for Jesus there is no difference between a humble Peruvian farmer or a “white man”. He died for everyone – even for the people who nobody else cares about. This is my one and only reason for being here. It is also the reason that Hospital Diospi Suyana exists in this land of contrasts – in the midst of a “forgotten people”, a place on earth where there is little hope. Because we have a God who offers His love to one and all – waiting to make each one His beloved child. 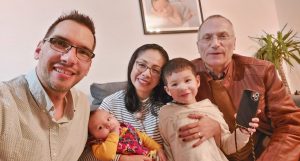