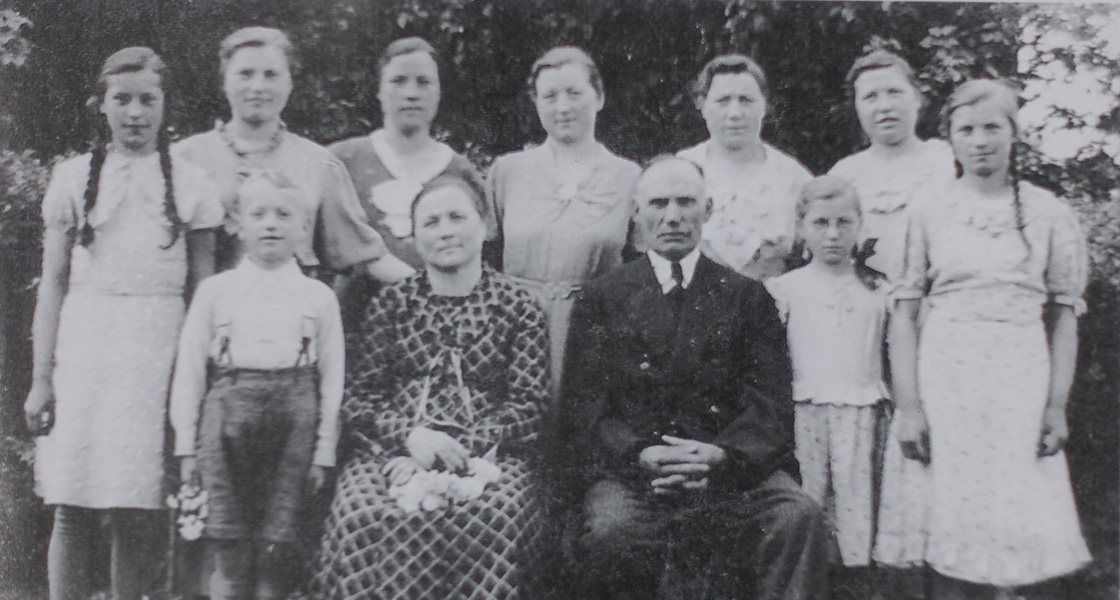 They were all brave, tough and believed

If we do not know where we come from, most of us are in the dark as to where we are going.  Our ancestors played a very special role as regards the fate of our lives.  We carry their genes in our cells and we learnt from them both directly as well as indirectly.  Whether we like it or not, we are a part of a long chain of people whose history we share.

My mother’s forebears followed Czar Catherine the Great’s invitation and moved to Volhynian that today is part of Ukraine.  They felled forests and established German colonies.  Theirs was a hard life, but through their hard work they were able to build up modest prosperity.  In the turmoil of both World Wars they encounter ethnic tensions between Poles, Ukrainians, Belarussians, Germans and Jews again and again.

1929 Julius and Olga Reinsch (centre) moved to Lottin near Neustettin in Pomerania where they took over a farm.  In 1936 my mother Wanda (far left) was 12 years old – when the above photo was taken.  Apart from my 94-year-old aunt Albertine (second from the right) who lives in Wiesbaden all of the others are buried somewhere or other.

It is due to my eldest aunt Leokadia (not on the above picture), her daughter Ruth Rabenau and nephew Reiner Janke that so many details of our family history are preserved in printed form.  Reading her enlightening report yesterday evening I was thankful that I was spared such a laborious and dangerous existence.  No one wants to flee in a horse and cart with just a few of his/her personal belongings during which time one is at risk of being blown up by passing tanks or enemy planes.  For weeks

fear, uncertainty and the cold dominated them.  Their trek brought them to Stralsund.  My grandfather was brought on an isolation ward by himself.  My grandmother was brought to another hospital.  My mother Wanda, 21 at the time, wrote her father a note saying that Mummy is in hospital with suspected Typhus and that she would continue her journey not really knowing where she is heading.  She gave a nurse this piece of paper asking her to pass it on to her father.  When he received it, it broke his heart.  The nurse reported later that he read it again and again and could not stop crying.  He died three days later.  (According to what Aunt Leokadia wrote down).

All of my grandparents, uncles and aunts held fast to their faith in God.  The conviction that a higher power exists who loved them

despite all setbacks and who helped them to build up a new existence in the West from nothing.  Apart from my grandfather I never personally met the people in the above picture.  So I know that their hope in God was the centre of all their strivings right until the very end.  God was more important to them than money, success or health.  During my childhood I never doubted that their faith was genuine.  They read their bibles daily and entrusted themselves to God in prayer.  Each evening my parents knelt on either side of their marital bed and prayed: impressions that control my life until today.

As a young man I once wanted to test my Dad’s faith.  I was invited to my parents for supper.  Over the intercom I said: “Dad, I have a tramp with me.  Can I bring him up so that he eat with us?  Without a second’s delay he replied: “Of course, he is more than welcome!” /KDJ