Marcos Acuna tells his story and a little later he is signing his contract.  That was yesterday.  Today, he will be traveling in southern Peru for Diospi Suyana.  On foot, by car, and by bus.

Flashback:  Marcos is enjoying life.  He plays his guitar in a band and goes with the flow.  He regularly lightens his mood with cocaine and marijuana.  His clothes and long hair show that he is not interested in a consistent career or place of residence.

2009:  One day he finds himself in the possession of a Bible.  He begins to read page one.  Each word is etched in his imagination.  He continues reading until 1200 pages later he is sure that he needs forgiveness and help.  Jesus Christ is the answer to his quest for meaning and fulfillment.  He confides in God and begins to pray; this is how the miracle begins.  He is now free from the drugs.  He will no longer touch the stuff.  A year later he cuts his hair and begins a four-year theological education.

His brother is an alcoholic, his father, a radical communist.  The changes in the life of Marcos make a deep impression on his family members.  One after the other, they come to Christ.  His brother no longer drinks and his father has changed his world view.  On Sundays they attend a church service together in a Protestant church.

Wednesday, 2:30 PM.  Marcos has signed his contract and is happy with his steady job at Diospi Suyana.  He will visit former Diospi Suyana patients in southern Peru and inquire about their condition.  Of course, he also wants to talk to them about their faith in God and share his own experiences.  The hospital pastor, pastor Santos (left), wants to guide and encourage him in his work.

This is no easy mission for Marcos.  He will often have to walk for hours through the mountains as far as his feet will carry him.  Heat and frost, snow and rain will be his faithful companions.  One more reason to give him to the care of God. 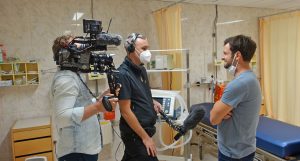 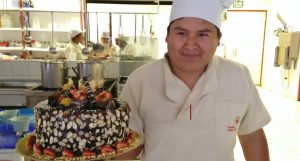 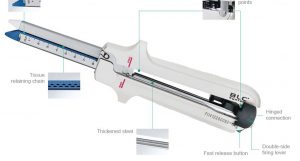